When people die, we say stupid things. We are so ill-equipped here in the good ole US-of-A to deal with death that we either say nothing or say something stupid. And I think that’s okay. Death is the ultimate awkward situation, grief is the tornado that flattens every house on the block and we the people just don’t know what to say when someone dies. Particularly when that person is an addict.

“Well, what did you expect given who her parents are?” “So tragic but not exactly a surprise.” “You’d think she would have stayed away from drugs after what they did to her mother.” These are just a few of the gems I saw on Twitter after Bobbi Kristina Brown passed away late last month. Brown, the daughter of Whitney Houston and Bobby Brown was, like myself, born into the disease. Kids like us have an uphill battle and increased odds of being addicts ourselves. But I don’t believe we children of addicts and alcoholics are “doomed to be killed by the disease” as many people said on Twitter. Look, the heartbreak that poor kid must have felt after her mother died in 2012 must have been unbearable. If we’re to believe the reports, her drug use spiralled almost immediately. This makes sense to me. With no example of sobriety in her life, she turned to the tool she’d seen her parents use–and get destroyed by. This is how we cope with everything. And as kids who’ve seen the wreckage it can cause it DOES sound crazy that we’d gladly turn to the substances that we know might kill us. I was told from age 11 that if I drank or did drugs, the chances were good that I’d get addicted. My attitude was always, “Yeah, yeah, yeah. We’ll see about that.”Low and behold, the disease kicked my ass and I barely got out alive. It’s a testament to the power of the disease that I knew what the outcome would probably be and thought I could outrun it anyway. Like I said—crazy. The real tragedy with Bobbi Kristina was that despite having millions and famous parents she died without giving herself a chance to change the story.

Earlier this summer, the husband and I were in some trendy home furnishings store. The above song was blaring and two adorable salespeople, who I guess should have been working, were dancing and lip-synching. Their joy was palatable. The pair burst into laughter when they noticed we had seen them. “By all means, continue,” I said. “You HAVE to dance when this comes on.” The lanky hipster guy of the duo said, “You can’t resist it.” And they continued having their at work dance party. This is what Whitney Houston has left behind for us: the joy of infectious pop song delivered by that powerhouse voice. And for an addict who suffered for so long, this is an incredible gift to leave behind. So to answer that question in the headline- maybe broken hearts, like Bobbi’s, never go away. Maybe the hurt of a loss just lessens over time. Or maybe if we’re lucky and work really hard, we can exist on this planet with a broken heart and still have a happy life. And maybe even dance.

It’s so alcoholic of me to turn the death of someone else into a blog post about myself. I remember going to a meeting the day Michael Jackson died and all anybody could talk about was how hard  the death of a person they didn’t know was for them. We’re such a dramatic and self-centered lot. Therefore it is difficult not to talk about Whitney Houston. As an addict and alcoholic and fan, it’s hard not to take her death personally. 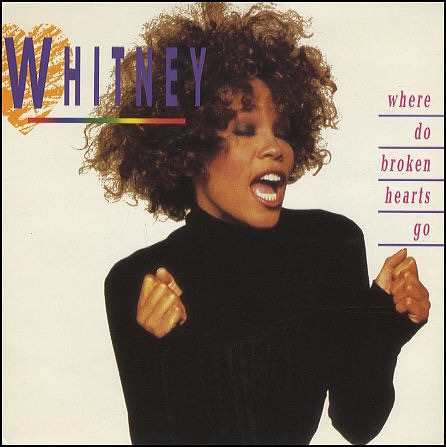 As the news is still fresh and many tears are still not dry, when it comes to Whitney Houston’s death over the weekend there is so much we still don’t know. It’s tempting to say it was drugs or booze that killed her. But the fact is we don’t know. As a person in recovery,  I can assume she chose the final and tragic Door Number 3. They say there are only three options a life without recovery has for those who cannot stay sober–jails, institutions and death. My snap judgement is that she is a victim of the third option.  It angers me because I’ve seen friends die because they couldn’t stay sober. But again, we  just don’t know. So the best we can do is mourn her, appreciate her talents and pay tribute to her.

But is that truly the best we can do? After the decades of Judys, Jimmys, MJs and Amys when do we stop co-signing the behavior and acknowledge that these brilliant tortured souls died of a fatal disease?  With MJ, we blamed someone else. With Amy, we ignored the obvious. If it does turn out to be drugs and alcohol that killed her, maybe Whitney’s death could be an invitation to an honest, global conversation about the reality of addiction. Kate Middleton has taken on the project of alcoholism and addition in England. Diana’s pet project was AIDS. Middleton clearly sees the issue as serious as any other major, fatal health epidemic. And that’s what it is. Houston admittedly tried to get and stay sober for years. To honor her memory with education and honesty, would be truly awesome.

And yet we just don’t know. I saw Whitney Houston in concert in 1990. The reason you went to a Whitney concert back in the day was to see that freakishly amazing voice come out of this beautiful woman. She didn’t disappoint. That voice was her special effect. That voice was the superpower she had over millions. In life that voice could change minds, inspire and give you chills. There’s no doubt her voice will live on for decades. We’ll remember that gift and maybe not talk about the demons that so clearly plauged her. And even when we do know more, we’ll just focus on the good stuff. Because we think that’s the best we can do.