As friends were sharing the other night about the legendary icons that they share their birthdays with, I pulled a Debbie Downer and said, “Nobody cool has my birthday. Except Billy Idol.” In addition to requiring the “wah-wah-wah” music necessary for such a moment, it was an out-and-out lie. First off, last time I checked Billy Idol was still awesome. Secondly, how could I forget that I share the same birthday as Mark Muthafuckin’ Twain? 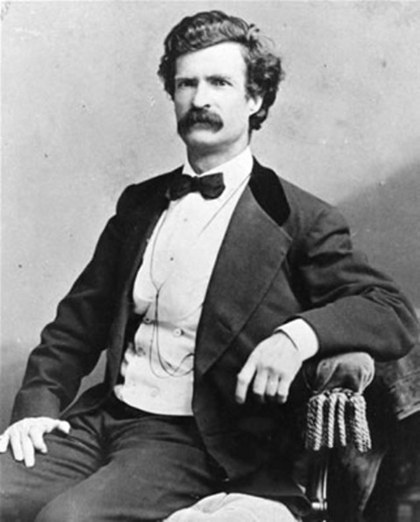 Aside from rocking epic moustaches that would make a modern-day hipster weep into his craft beer, Twain is the original American satirist badass whose take no prisoners style of writing and speaking his mind have turned him into a literary icon. Although my dad had the requisite massive volume of Twain’s collected works and I was forced to read Huck Finn at a young age, Twain’s genius didn’t hit me until much later. The dude was a one-man quote factory, pumping out brilliant thoughts on every topic during the duration of his lifetime. Just think of something- anything, and I’m sure Twain had something to say about it. And it’s usually brilliant and hilarious. His musings on aging have helped me over the last few days. Like this one:

“When your friends begin to flatter you on how young you look, it’s a sure sign you’re getting old. ”

“Age is an issue of mind over matter. If you don’t mind, it doesn’t matter.”

I usually try to read some Twain around our birthday. I say “our birthday” like we get together every year, decked out in fancy suits while we trade quips and drink bourbon. But for some reason this quote has never popped up on my radar:

“I am an old man and have known a great many troubles, but most of them never happened.”

Of all the Twain I read, this resonated with me the most–go figure! Not the old man part, mind you. I’m not quite ready to own ‘old man’ yet. I’m still trying to swallow the lie of a cocktail called “Forty & Fabulous.” But having “a great many troubles”, most of which never happened, now that I can identify with. In fact, that’s kind of the thesis statement of this blog. Leave it to Twain to nail in a few short words. After a ‘tough’ week where most of my misery was cooked up by your’s truly, he comes along and puts it all into perspective.

So Happy Birthday, Mark Twain. Thanks for 177 years of knowing just what to say. I’m honored to have you as a birthday mate. And Billy, you’re not so bad either.